The Gamperdonatal in its upper reaches is a typical glacial valley with more or less semi-circular cross section. The same holds for the Salarueltal, a small side valley. The spasmodic retreat of the Gamperdona Glacier during the period of deglaciation following the last major Pleistocene ice advance, when it was no longer merged with the Ill trunk glacier, is documented in a series of morainic ridges near Nenzinger Himmel.

Ice-marginal landforms such as those at Nenzinger Himmel can be used to establish the position of the former glacier and, from this, to calculate the corresponding snowline or more precisely the equilibrium line altitude (ELA). Local ELAs can be compared with and correlated to other locations were glacial accumulations stemming from the end of the last glaciation have been documented. The landscape formation of a local area, thus, becomes part of the reconstruction for a larger area, and a relative chronology can be established. The scientific value of ice-marginal landforms is high. They classify as potential geoconservation sites.

Nenzinger Himmel seen from the south. The hummocky morphology in the central foreground are moraines which were  deposited by the glacier flowing from the Salarueltal (right) into the wide valley of Nenzinger Himmel at the end of the last glaciation. Photo: Erwin Häusle, Panoramio photo id. 79545117 and 79545018.

The moraines near Nenzinger Himmel, between approximately 1280 m and 1370 m, show a somewhat chaotic pattern. They almost exclusively consist of debris derived from the Hauptdolomit formation, which is exposed in the steep southern and eastern slopes of the Salarueltal, a large cirque to the west of the Panüeler Kopf (2859 m) and Salaruel Kopf (2841 m) summits. The glacier responsible for the deposition of the morainic material thus came from the Salarueltal rather than from the Güfelalpe area in the southernmost part of the Gamperdonatal, where the river Meng springs up. The northern exposure and excellent shielding from the sun by the high southern and eastern walls are factors promoting glacier development in the Salarueltal. Small depressions, reflecting ice-cored deposition, and preserved meltwater outlets are evidence of the dynamic conditions at the former glacier front near Nenzinger Himmel. Locally, undercutting and erosion by the local rivers, formation of post-glacial alluvial and debris fans and small-scale mass movements have modified the original shape of the moraines. Some moraines have been excavated for construction material (several small pits), and summer houses have been built on top. 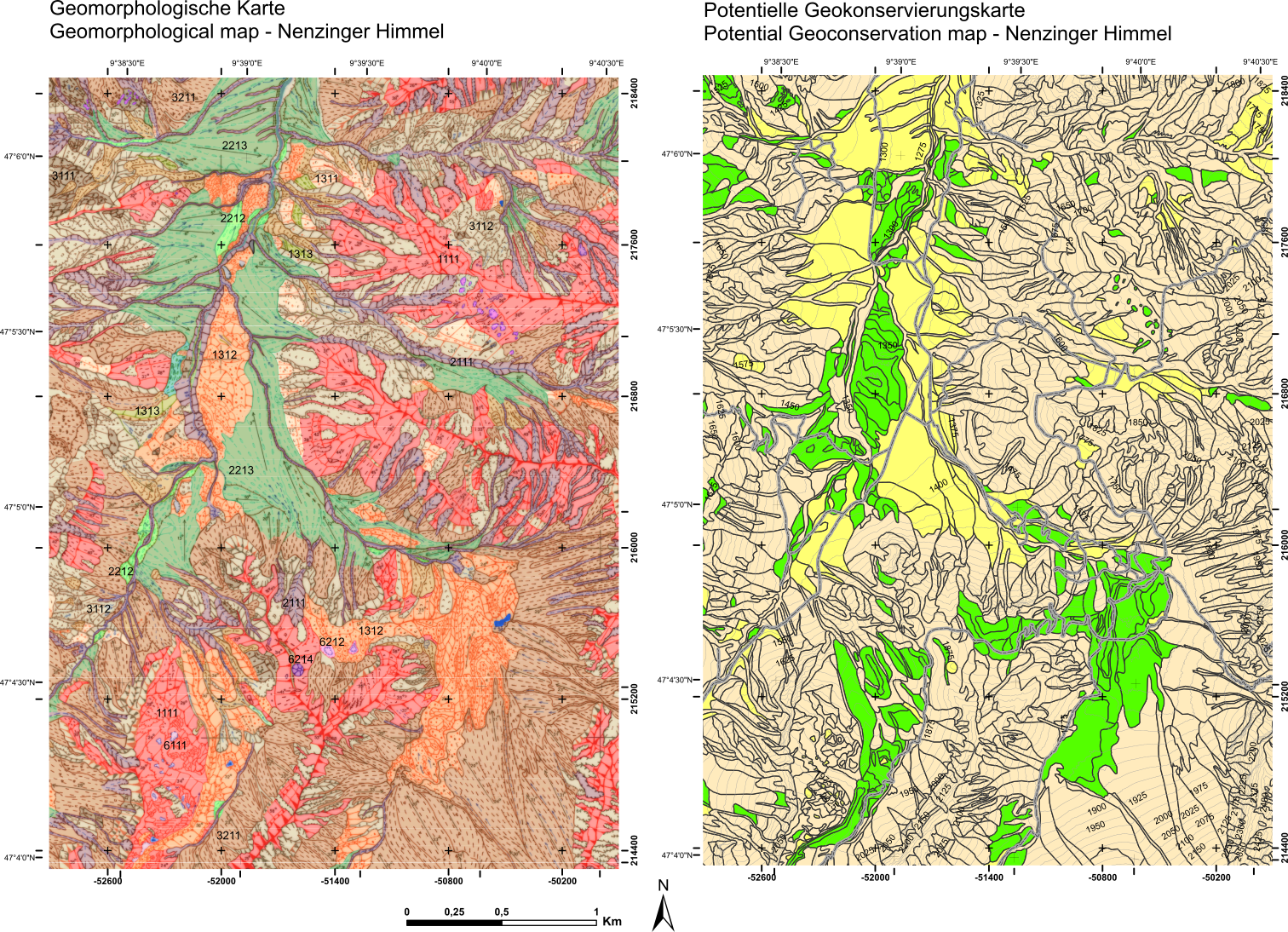 Five groups can be differentiated in the series of moraines between 1500 m and 1800 m at the mouth of the Salarueltal, reflecting the spasmodic retreat of the Salarueltal Glacier at the end of the last glaciation. The Hirschsee, a small lake in the valley, is formed within the arc of one of the moraine accumulations; it is fed by numerous springs at the foot of the large scree slope below the steep cliffs of a pronounced niche in the Oberzalimkopf-Spusagangscharte divide.

Moraines also occur in the Inner Panüel area in the eastern part of the uppermost Gamperdonatal. Morphologically, Inner Panüel is a large rock ledge below the Hornspitze-Strahleck divide to the east of Güfelalpe. The west-exposed flank of the SSW-NNE running divide is high and steep, offering excellent shielding from the sun. Unsurprisingly, a series of moraines is found on the rock ledge, deposited at the end of the last glaciation by a local glacier which probably remained active for a relatively long period of time due to its position in the shadow of the divide.