A large number of landforms and deposits in and around the municipalities of Götzis, Klaus, Fraxern and Weiler on the eastern flank of the Rhine Valley bear witness of the intricate interplay of glacier and water at the end of a glaciation. Three areas are described below, each telling a part of the story of deglaciation after the Upper Würmian glacier advance: the Rhine valley floor; the “ridge-and-valley landscape” southeast of the village of Götzis; and a transitional landscape with erosional and accumulational landforms at Weiler.

The Rhine Valley has been carved out widely and deeply during multiple glaciations by the Rhine Glacier, carrying its main confluent glacier in Vorarlberg, the Ill Glacier, along the eastern flank of the valley. The bedrock in the central parts of the Rhine Valley and of Lake Constance is largely below present-day sea level. During interglacial periods, generally speaking, valley and lake area were filled with lacustrine, deltaic and alluvial-fluvial sediments. This also occurred at the end of the last major glaciation, when the Rhine-Ill Glacier was receding into inner-alpine areas. The Rhine Valley became free of ice and turned into a lake between 16000 and 15000 years ago. The existence of the Neolithic fisherman settlement at the southern foot of Kummenberg suggests that the lake still extended to that area 4000-5000 years ago.

Streams flowing into the Rhine Valley from the ice-free tributary valleys built deltas out into this extension of Lake Constance. With time, when the lake was being filled with sediments, largely from the Rhine itself, the tributary streams started to form alluvial fans on top of the deltas. These fans are at present eye-catching landforms at the mouth of every tributary valley.

Alluvial fans and deltaic deposits of the affluent rivers consist largely of boulders, pebbles, gravels and sands. The Rhine also transported and transports large quantities of coarse debris. The bulk of the sediments in the valley, however, occurs below the present level of Lake Constance (~396 m) and consists largely of fine-grained lake-bottom deposits.

The drainage pattern of the mountainous part of the eastern Rhine Valley flank is controlled by the structures of the Helvetic bedrock. Most streams flow to the southwest in synclinal valleys. The divides are elongated ridges corresponding with asymmetrical, partly overturned, anticlinal structures. The succession of Helvetic formations in the study area is exposed in the gorge of the Emmebach (Örflaschlucht), a “dry valley”.

At the start and end of glaciations, when the Rhine-Ill Glacier filled the central Rhine Valley while the higher terrain on the eastern flank was free of ice, the course of the rivers was determined by the height and position of the glacier margin. A system of dry valleys and local series of ice-marginal terraces of fluvial origin, deposited during the final stages of the last glaciation, is evidence of this interaction (see figure below). The local streams transported much water and sediment, especially during spring (snowmelt) and during the precipitation-rich summers. The valleys of the Emmebach, Klausbach and Ratzbach are fluvial; a local glacier never developed, due to the relatively low altitudes of the catchments. The Laternsertal, south of the study area, is much larger. Its glacier developed and merged with the Rhine-Ill Glacier when the level of the ice surface locally rose above 1000-1100 m. Fluvial discharge and sediment transport by the Frutzbach from the Laternsertal took place as long as ice levels in the Rhine Valley were below 900 m altitude.

Dry valleys initially formed when sediment-loaded streams in the tributary valleys were blocked by the Rhine-Ill Glacier and were forced to divert their course from southwest to north. These streams, then, flowed over the lower passages of the local divides, and valleys were cut deeply by backward erosion at various angles to the geological structures. The process of backward erosion is nicely illustrated by the Pfaffenkellerloch between the villages of Weiler and Röthis, in the south of the study area. It is the head of a valley which does not extend entirely through the divide. When the blockade by the Rhine-Ill Glacier was lifted, the rivers resumed their original course and the valleys which were eroded in the divides became “dry”.

The dry-valley system developed over a very long period of cumulative time during successive glacial-interglacial cycles. The pattern of valleys is intricate and suggests that some formed earlier and/or were actively used more often than others. Generally speaking, well-developed and more or less connected dry valleys formed in two different topographic positions in our study area. Whether the higher or lower drainage system was active was determined by the height of the ice surface of the Rhine-Ill Glacier. Note that the proximity of the glacier is documented locally by the presence of morainic accumulations, e.g. in the Plattenwald and on the western side of Mathionswiesen. Regional reconstruction of the step-by-step recession of the ice from the area at the end of the last glaciation shows that the valleys functioned no longer than several hundreds of years. The largest dry valleys reach depths of 80-100 m and more. Studies of fluvial erosion of the affluent streams involved indicate that vertical incision, even in relatively incompetent rocks, has been at most a few tens of metres in the last fifteen thousand years. It is, hence, safe to conclude that the valleys were formed during more than just one glacial-interglacial cycle.

The large valley through which the road Götzis-St. Arbogast-Klaus runs is part of the lower drainage system. The higher valley system is situated to the east of it. It is more complex, with several branches, some of which are deeply incised. Several shorter dry valleys occur in the area between the two systems. Although it is evident from their general shape that many of these landforms were modelled by glacial erosion too, they all are considered to have been used by running water before the last major glaciation and used again by ice-marginal streams during short periods of time at the end of it.

The ice-marginal alluvial-fan terraces at Weiler

Ice-marginal alluvial fans form where affluent streams are blocked by and diverted along the margin of a trunk glacier. The streams lose their transporting capacity by the blockade and the loss of water into the ice resulting in deposition in part along the valley slope and in part on the ice. Lowering of the ice level leads to erosion and reworking of the deposits, thereby creating a fan at a lower level and turning the higher one into a terrace. Terraces formed by these processes at the end of the last glaciation abound on the Rhine valley slope near Weiler and further south towards the village of Rankweil. The position of the terraces allows the reconstruction of former successive glaciers margins over wider areas. This makes these landforms in Vorarlberg excellent markers for reconstruction of the deglaciation history both locally and on a regional scale.

The ice-marginal fan deposits between Rankweil and Weiler all formed in a time span of no more than several hundred years, approximately 16000 years ago, as was deduced from regional analysis of the deglaciation history. A reconstruction of successive stages of deglaciation is presented in the figure below. Also shown is the relation between the terraces and the dry valleys of the ridge-and-valley landscape. 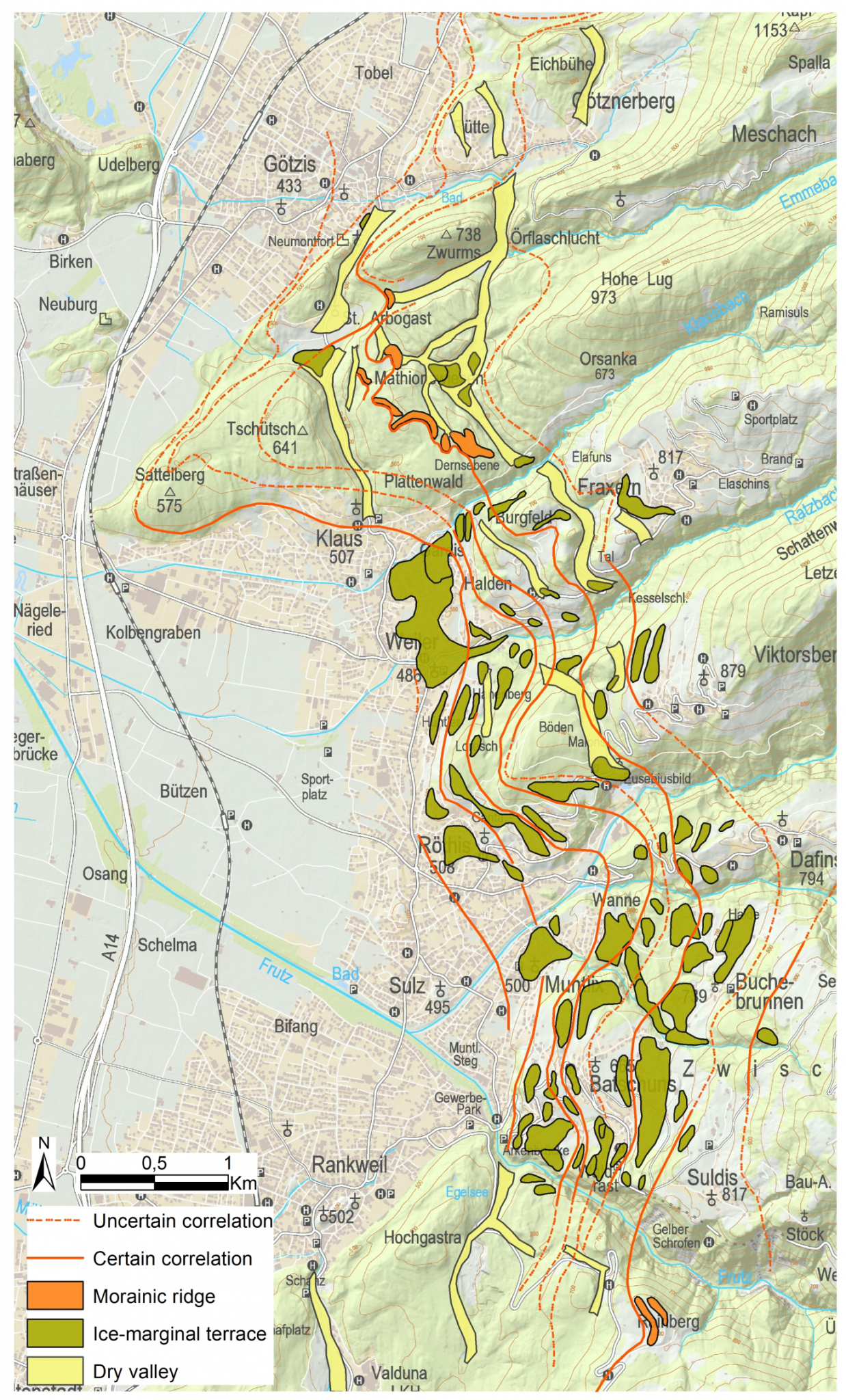 The figure on the left shows the location of ice-marginal landforms and deposits in the area between Götzis and Rankweil. Reconstructed stationary positions of the Rhine-Ill Glacier are shown by solid (certain) and dashed (uncertain) lines (after De Graaff, 1996). Dark green: ice-marginal alluvial fan deposits; yellow: dry valleys; orange: moraines.