The following are based on Chapter 2 Geomorphological maps of the book Geodiversity of Vorarlberg and Liechtenstein by Seijmonsbergen et al. (2014). Please consults this chapter for details and references.

Geomorphology can loosely be defined as the study of landforms and of the geological forces that produce them. Geomorphology combines form, material and genesis. Form refers to the outer shape of landscapes and landscape elements, material to the substratum, i.e. the consolidated and unconsolidated rocks that underlie the surface of the landforms, and genesis to the past and present processes that have created the landforms. Geomorphology is the science upon which our approach to the identification and assessment of significance of landscapes and landscape elements is founded. Maps – on paper or in digital format – are an essential component of geomorphology.

Classical geomorphological maps are representations of landforms – their outer shapes, underlying materials and formative processes – which have been generated and presented on paper. Symbols and colours are used in various combinations to ‘depict’ the landscapes. A variety of point symbols, lines and polygons is applied to document geomorphological boundaries, which may be crisp, gradual or diffuse in the field. Our classical map of Vorarlberg and Liechtenstein is an essentially field-based, area-covering inventory at the detailed scale of 1:10000. The legend is a “box-of-bricks” of symbols and colours. 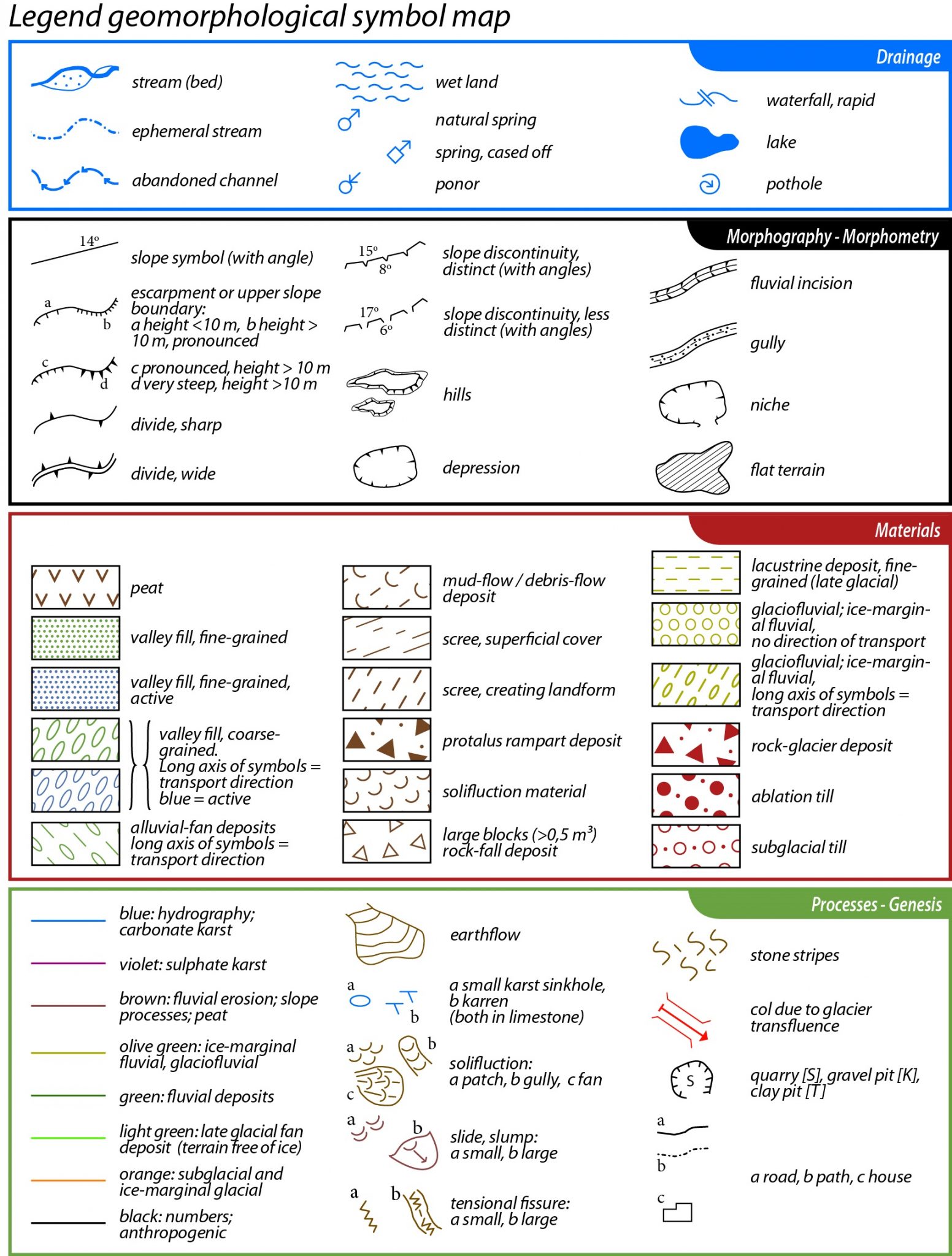 The above figure shows the legend of the classical geomorphological map of Vorarlberg and Liechtenstein. 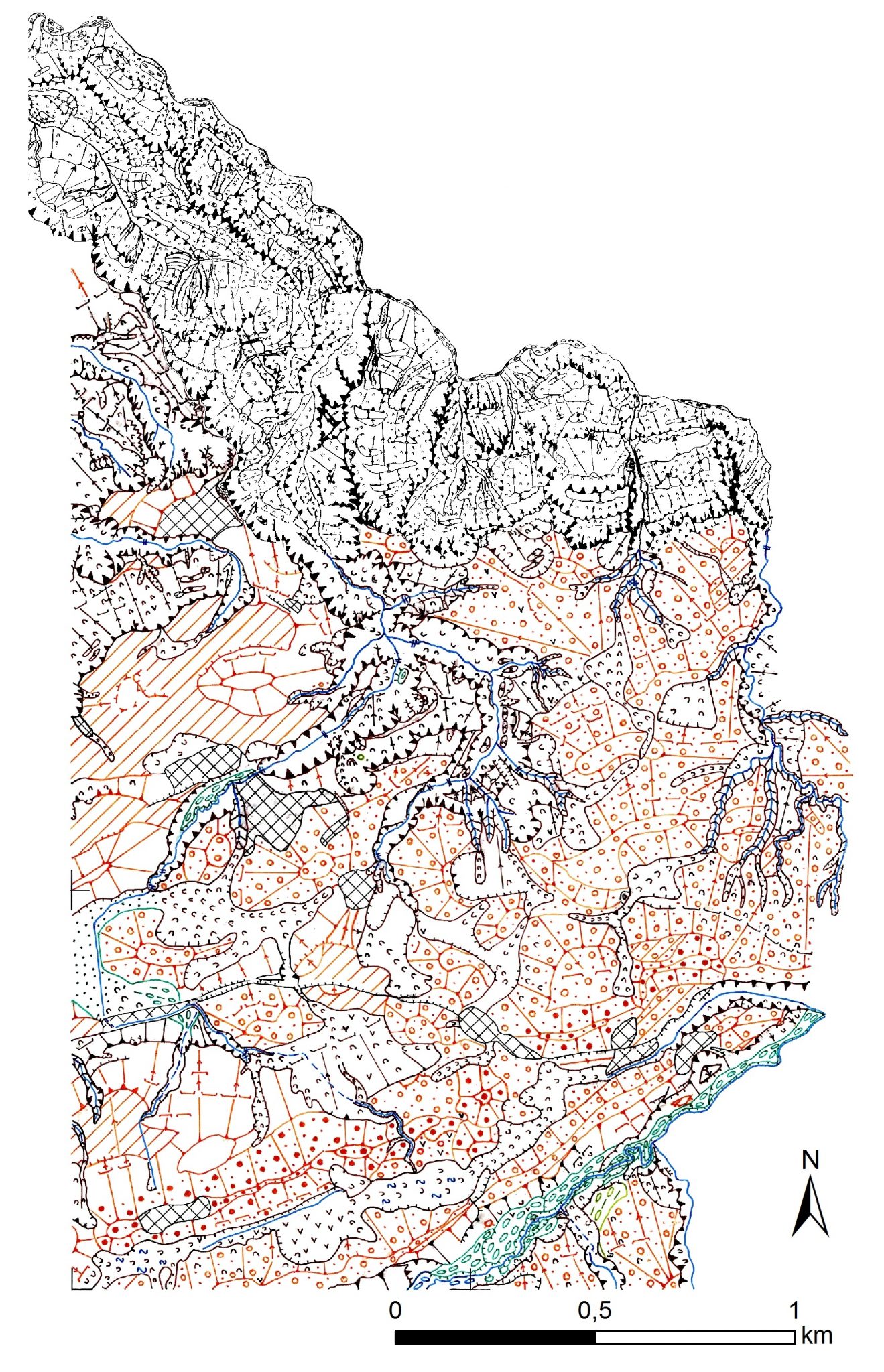 The figure above-right shows the field–based and hand-drafted geomorphological map of the Weienried area. The coloured map part covers the gently undulating glacial terrain; the original map was made at scale 1:10000. For legend see table above-left. The black-and-white part in the north covers the flank of the valley of the Rickenbach; the original mapping scale is 1:5000. With the exception of a few small (sub)recent river terraces (to be displayed in green), all features on the black-and-white map would be displayed in brown as fluvial-erosive and mass-movement landforms if applying the colours of the legend of the table.

The computer-generated geomorphological map is a digital collection of georeferenced data which provides scale-independent information on the Earth’s surface geomorphometry/morphography, surface material distribution and processes and is, in its most advanced form, accompanied by an accuracy assessment. Raw data and information are stored in a (geo-)database, which contains georeferenced raster, vector and tabular data. These data can be queried, analyzed and visualized in, for example, a GIS environment. The term ‘map’ has become somewhat inappropriate for these databases; for the sake of convenience, however, we still use it. A more appropriate term is digital geomorphological information layers. The data and layers are part of a geo-database which contains other types of information, e.g. a geoconservation assessment.

Fundamentally new, semi-automated and computer-based mapping techniques are nowadays also being developed. Main drivers behind this development are new quantitative techniques for analyzing landscapes and landscape change, the availability of high-resolution digital data of the Earth’s surface, such as laser altimetry data, and the ever-increasing processing and display capabilities of computers. The basic objects of geomorphological study – form, material and genesis of landforms – remain unchanged, but the practical approach is very different from the traditional way of making maps.