The Mouth of the Gamperdonatal

In Vorarlberg, the  Quaternary landforms and sediments of the southern Walgau region are a unique scientific archive, which can be used for the study of landscape development in the Alpine environment as a function of climate. The working of the glaciers of the last ice age (Würm, Weichsel), the restoration of a drainage pattern in response to the melting of the ice, the reshaping of the glacial topography by mass movement and periglacial activity – these processes have left their footprints within a framework of a complex geological substratum. A key factor was the interaction of the trunk glacier in the large Illtal, with origin in the high parts of the Montafon region and Silvretta mountains in southeast Vorarlberg, and the local glaciers in the tributary valleys of the northern Rätikon mountains where the accumulation areas of snow and ice are at lower altitudes (see The Walgau Glaciation Model). The occurrence of abundant crystalline erratics in the lower sections of these side valleys unequivocally documents the penetration of the Ill Glacier. Crystalline bedrock does not occur in the tributary valleys. It crops out in the Silvretta mountains, i.e. the highest accumulation areas of the Ill Glacier. The local glaciers apparently did not fill the lower valley sections during the periods of major climate change, leaving space for the trunk glacier to penetrate. The differences in altitude of the accumulation areas account for this pattern: the local glaciers appeared later and disappeared earlier than the trunk glacier.

The Ill Glacier, for example, was able to penetrate the ice-free lower reaches of the Gamperdonatal approximately 7 km at the onset of the last major glaciation before coalescing with the local Gamperdona Glacier. Conversely, the Ill Glacier still occupied the lower parts of the Gamperdonatal during deglaciation when the local glacier had already retreated into the upper valley reaches. As a consequence, the drainage of the river Meng was blocked at these times and ice-dammed lakes formed in the valley. Water level and spatial extent of the lake formed during the last deglaciation period in the Gamperdonatal can be reconstructed from the landforms and sediments which are preserved in the lower and central parts. Older lakes are documented in the stacked and lithified deltaic deposits preserved in the flank of the gorge of the Meng at Büderhöhe – a sequence unmatched in the eastern Alps.

The southern flank of the Ill Valley between the villages of Gurtis and Nenzing is covered by an intricate pattern of ice-marginal landforms, both accumulative and erosional. They formed during the last period of deglaciation and document the stepwise retreat of the Ill Glacier from the area. A drainage network was developing in the Gamperdonatal (and Galinatal) at this time, with local base levels being determined by the height of the Ill Glacier, and sediments were deposited by the streams at the mouth of the valleys against this glacier predominantly in a downstream direction. At times, the running water eroded deposits and created gullies which are now present in the landscape as dry valleys. The reworking of morainic material from the Ill Glacier is evident from the considerable amount of large debris of crystalline composition. The irregular topography of a number of these landforms is ascribed to the presence of dead ice: the sediments were deposited on top of ice masses which were disconnected from the actively moving ice body; these blocks melted under the cover of sediments slowly, thus creating a hummocky and occasionally kettled topography.

Information on former drainage networks, ice-margin positions and glacier-surface gradients can be deduced from ice-marginal landforms such as those between Gurtis and Nenzing. These and similar techniques make it possible to reconstruct how the glaciers gradually, i.e. step by step, disappeared from the area at the end of the last major Pleistocene – i.e. Upper Würmian – glaciation. All information contributes to a better understanding of the pattern of climate change during the transition from the last glacial period to the present interglacial. The scientific relevance of the ice-marginal landforms and deposits as well as their high rank in the assessment of geoconservation potential is, thus, evident.

A series of ice-marginal alluvial-fan terraces is preserved on the southern flank of the Ill Valley near the mouth of the Gamperdonatal at Bazulwald, to the west of the camping-site of Nenzing (see figures on the right). The Meng, which drained the already ice-free lower parts of the Gampertonatal, deposited sediments against the Ill Glacier in an alluvial-fan setting while continually adapting to the lowering of the ice mass. Six levels of terraces can be distinguished (1005 m, 995 m, 990 m, 982 m, 970 m and 940 m), marking steps in the downwasting of the surface of the Ill Glacier.

A lower group of terraces is situated between approximately 750 m and 650 m just north of Bazulwald. The hummocky surface at Latzwiesenboden (approx. 690-670 m; video below) is indicative of deposition of sediments around or on top of bodies of stagnant or dead ice. The originally even and gently sloping surface of the ice-marginal alluvial fan has become irregular due to the melting of the ice.

Notably, the thickness of the sediments underlying the terraces decreases in a downstream direction. Such a trend is not uncommon in alluvial-fan deposits. For instance, the thickness is more than 50 m near the former gravel pit of Gadon (indicated by ‘G’ in the figure) at the confluence of the Galina and the Rofelbach; it rapidly diminishes to the west.

A landform of particular importance is the almost 2 km long ‘dry’ valley of Gampelün (central-northern part of the figure), on the border with and in part within the municipality of Frastanz. It is the downstream continuation of the drainage system of the terraces of 745-730 m near the gravel pit of Gadon and, hence, part of the lower group of reconstructed ice levels of the Ill Glacier on the southern Walgau flank (see figure below). It shows an interruption, or offset, in an east-west direction due to a deep-reaching failure of the slope between Nenzing and Gurtis. The undisturbed nature of the overlying glacial deposits proves that the failure predates the last glaciation. At present, instability is negligible.

The hamlet of Latz (720 m) is built on a relatively large alluvial-fan terrace on the eastern side of the Galina. The terrace is also part of the lower group of reconstructed ice levels. Remarkably, the former drainage was locally to the east-southeast, i.e. in an up-glacier direction. The fan is interpreted to have been deposited by the Galina in a low south of the Rabenstein hill, which became free of ice as the result of a small ‘step back’ by the Ill Glacier in the overall retreat. Drainage was no longer to the northwest – the valley of Gampelün had become ‘dry’.

The village of Gurtis is located in a large niche which resembles a (small) glacial basin. Ice-marginal landforms and deposits (figure to the upper right) are arranged in a semi-circular pattern on the flanks of the niche. The basinal shape probably predates the last glaciation, as is suggested by its size and the occurrence of subglacial till in the incision of the Rofelbach. Morainic accumulations on the northern side of the Rofelbach (1000 m, 960 m and 930 m) occur in association with small meltwater gullies and associated deposits (995 m, 950 m and 945 m). The irregular and undulating topography in the central-eastern part of the basin (code 1313 in the figure), which is underlain by gravelly deposits, is ascribed to presence of dead ice which had become covered by ice-marginal sediments. The landforms and deposits are in a stratigraphically higher position than those of Latz and Gadon (figure to lower right) and thus demarcate older ice margins of the Ill Glacier.

The ridges and some of the corresponding ice-marginal fluvial terraces further to the west, outside the map coverage of the upper-right figure, curve in an upstream direction into the valley of the river Samina, demonstrating that the lower reaches of this valley were also free of ice at that time.

The figure on the right shows the reconstructed former ice-margin positions of the Ill Glacier in and around the Gurtis glacial basin between 1200m and 700m altitude based on the information contained in the landforms and deposits in the area and its surroundings. Three groups of margins are differentiated: higher levels (brown), intermediate levels (red) and lower levels (orange). 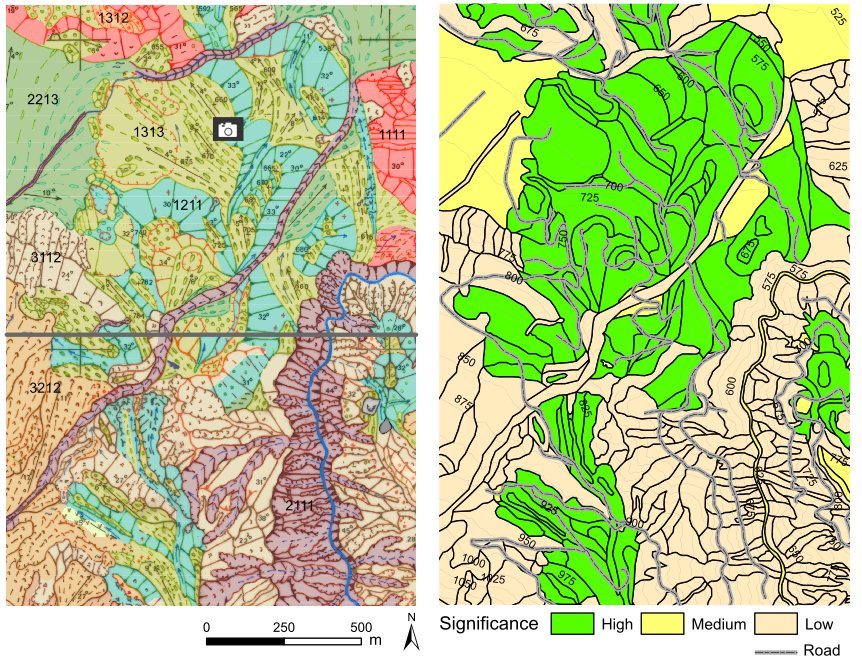 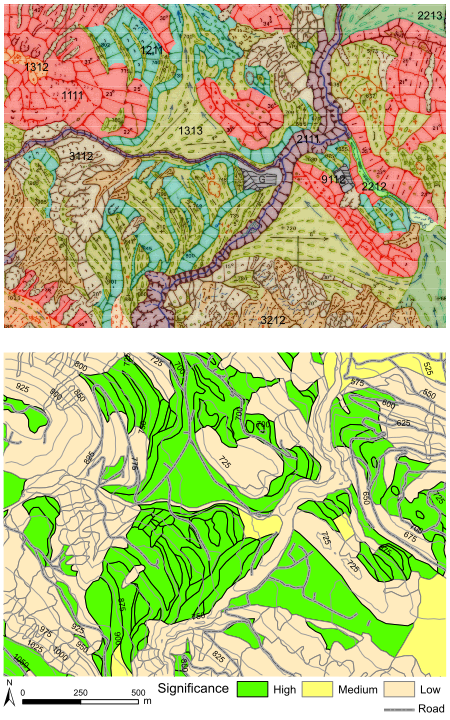 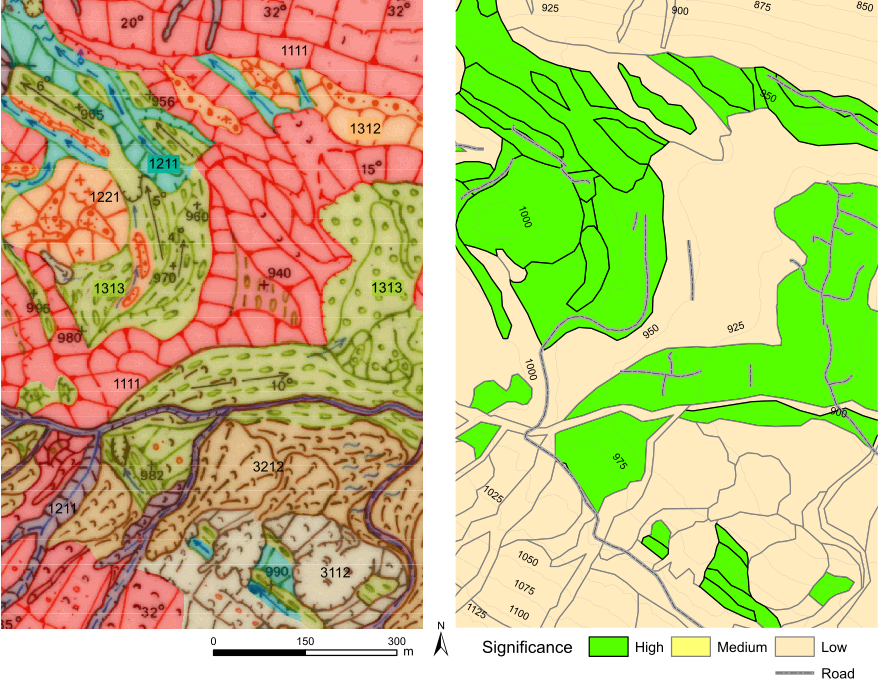 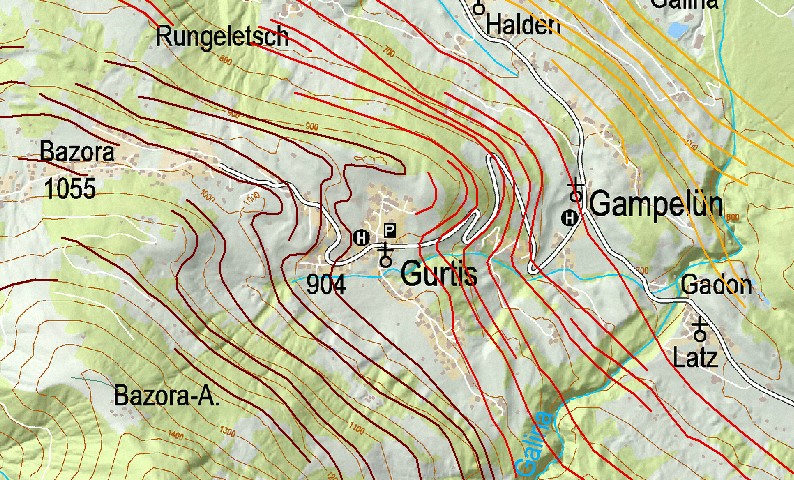